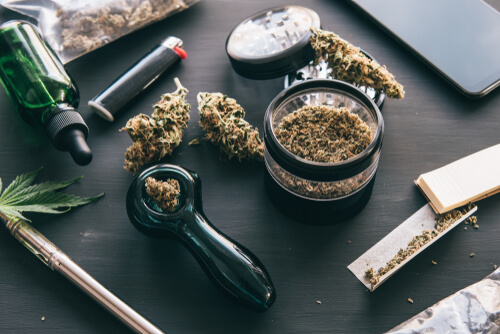 For those unaware, endometriosis is the abnormal growth of cells in the lining of the womb. Close to 10% of the women in the reproductive age range are affected by this ailment- this makes up an alarming 176 million women worldwide.

In this condition, the endometrial tissue begins growing outside the uterus and gathers around the nearby pelvic organs such as the bladder, ovaries, fallopian tubes and bowels. The likely science behind this is that during the course of the menstrual cycle, the endometrial cells are also released. Since the blood has no means to exit the body, it causes inflammation and discomfort.

Not all women experience the excruciating pain associated with endometriosis. However, if this is left untreated then it can lead to infertility. We will find out how CBD helps against endometriosis, and how the benefits of using CBD stack up. Read on…

In the case of endometrial cells, they adhere and stick around, with surgery only providing temporary breathing room from the pain. The endometriosis tissue makes a comeback and so does the excruciating pain. Standard medication apart from over-the-counter pain medication like paracetamol and NSAIDs, contraceptives are provided so as to limit the development of endometriosis tissue due to the presence of progesterone in them. Estrogen causes the fortification of endometriosis cells and helps it spread.

With the pain being nothing less than unbearable, many self-care methods were adopted which includes the likes of yoga, stretching and breathing techniques. To an extent, all of these helps in reducing pain, but the chunk of it still remains.

This is where CBD can come to bridge the gap.

The potential therapeutic benefits of the herbal extract go above and beyond simply managing pain, including restricting the spread of endometrial cells all over the body. In much the same way as cancer, endometrial cells are reluctant to die and make their way to other parts of the body. When the body’s endocannabinoid system-the body’s regulating system- is in working order, then cell apoptosis or cell death occurs that prevents unwanted cell proliferation. However, in the case of endometrial cells, they manage to fly under the radar and run amok.

The exact science behind the same is yet to be dug out, but scientists have reason to believe that the endocannabinoid system deficiency could be a contributing factor to the development of endometriosis.

The endocannabinoid system (ECS) has two primary receptors—CB1 and CB2—which when disrupted can explain the reasoning behind cells being left unchecked in the case of endometriosis. Furthermore, there are fewer CB1 and CB2 receptors that are present in the tissue that is available for endocannabinoids to latch onto- the natural cell apoptosis process is disrupted and the aberrant cells end up proliferating and spread all over. A study that was held in 2017 showed that the drugs that stimulated the CB1 and CB2 played a monumental role in reducing the spread and the growth of endometrial tissues. What happened instead was cell breakdown or cell apoptosis.

Cell apoptosis is a process where cell death occurs. It may seem like a bad thing but it is far from that-all cells are programmed to die and if they persist it can lead to abnormal growth-which is how cancer and tumors are formed. This all ties to the fact that CBD and THC have been documented to reduce the symptoms and encourage cell apoptosis in the case of endometriosis cells.

The anecdotal accounts of patients that have found relief from taking CBD oil and infused products are growing day-by-day. Of the benefits of using CBD, one of the well-attributed benefits includes that of controlling pain and discomfort. This can be pinned to the activation of the TRPV1 vanilloid receptor, which is overly sensitized in the case of endometriosis patients.

Cannabidiol is a stimulator of the TRPV1 receptor that allows reducing the sensitivity of it. It is a way of treating the pain in the same way that placing a hot pad on the abdomen helps in the mild activation of heat-sensitive TRPV1 receptors, which help to desensitize and kill the pain.

Since the mechanism and the working of CBD and the other cannabinoids have not been thoroughly explored to its full potential, there is plenty of room for hypothesis and question rather than answers. In time, that balance would tip to the opposite side, but scientists believe that for the time being the multiple components present in cannabis plants put together will be far more beneficial in keeping at bay endometriosis. We know that the entourage effect of all the cannabinoids acting together far outweighs the individual contributions of CBD alone. This is why in treating endometriosis in much the same way that millions of women have, stick to the full-spectrum- you are much likely to see amazing results!